My fourth book will be released to the world next Saturday (July 15). If you follow me, you know I’m a sub-genre hopper–like a rabbit or a frog, I hop from one sub-genre to another for no rhyme or reason other than to write the story in my brain. Possibly not the best thing for me as I build up my platform but on the other hand, that’s who I am as a writer. Why not share it with my readers? 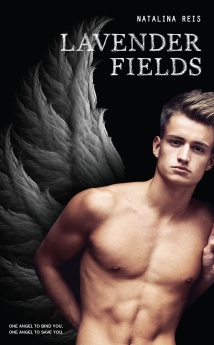 Lavender Fields is a M/M Paranormal Romance and had strange beginnings. Not unlike most of my books, this story started as a flash fiction piece written from a picture prompt, but took a whole unexpected life of its own.

Sky Heavensent was to be a girl alien at first (don’t laugh), but–pantser that I am–as I wrote the story she turned into a he, and the alien became an angel. By the time I was finished, the angel in my story grew to mean something much larger than just a character in a book. Thus the decision to turn a few pages of writing into a full-length novel.

Sky was born of some very deep beliefs I carry about humans and the way we relate to each other. It also embodies a lot of my hopes, fears, and emotional baggage.

As a character he’s not perfect. In fact, among his kind he’s an outcast ( know, I know. Another one), a very clumsy angel who seems to be an expert at making his boss, Gabriel, irate beyond what should be possible for an angelic creature.

But he is perfect in so many other ways. He’s color-blind, gender-blind, difference-blind. Like all angels he’s made of pure love but unlike the others he actually practices what he preaches. Sky is willing to do just about anything for what’s right even if that places him in all kinds of danger.

He has a big heart and he’s not afraid to use it. 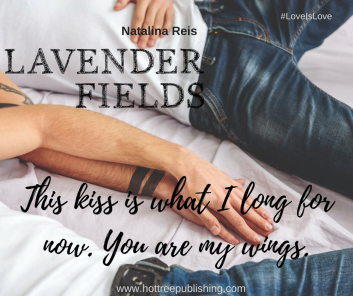 Writing Lavender Fields was an amazing experience because it came from the depths of me, those corners of myself that remain under wraps most of the time. I’m a terrible introvert who is incapable of participating in a conversation involving more than two people. So, a lot of what I think, of what I feel, of what I believe stay buried deep inside. Writing this story was in so many ways a release because the characters (all of them but Sky in particular) spoke for me.They all have a little bit of myself in them (including Caleb’s foul-mouthed younger sister) but I dare anyone who knows me to figure out what.

In fact, I believe that Sky was indeed heaven-sent. Have you ever written a character who meant a lot more to you than all the others?