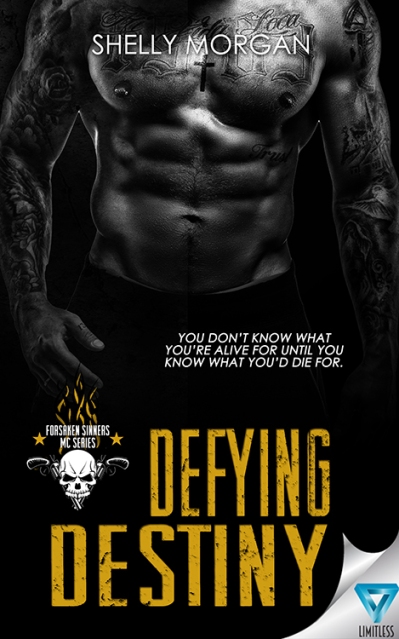 DEFYING DESTINY by Shelly Morgan
Forsaken Sinners MC Series #3
Cover Designer: TOJ Publishing Services
════ SYNOPSIS ════
Twenty-six-year-old Louie Creighton knows there is something inside him he can’t control…
Ever since he can remember, Louie has had a short fuse. People always said he’d amount to nothing. He wasn’t smart enough to get into college. He wasn’t tough enough to be a Marine. No one believed in him.
No one except his father, Mike Creighton…
Louie’s father always taught him to turn the other cheek. He was a true mentor, teaching him how to be a man in a world of cowards. But when his father is murdered the day after scratching a winning lottery ticket, Louie’s inner monster can’t be contained. He becomes determined to track down the suspect at any cost. All along, he struggles to live by his father’s motto—To find out what you live for, you have to discover what you’d die for.
Then he meets Harlow McPherson…
Her entire life has been a battle. Harlow grew up in the system, bouncing from one foster home to the next. Most weren’t that bad, but some were hell.
The only comfort was the fact she wasn’t alone. Her twin brother, Hendrix, was always there—until he took his own life years later, abandoning Harlow in a cruel world. Unable to forgive, it’s Louie who reminds her there’s still hope.
When Louie unleashes his inner monster, and Harlow finally faces her demons, will they lose themselves to the darkness, or risk it all Defying Destiny?

════ Forsaken Sinners MC Series ════
Book 1: Rewriting Destiny: http://amzn.to/1MAjRMg
Book 2: Fighting Destiny: http://amzn.to/1ReitV4
Book 2.5: Born Into Destiny: http://amzn.to/1RIIDLq
════ MEET AUTHOR SHELLY MORGAN ════
I grew up in a small town in Iowa. I have 2 older sisters and amazing parents. Growing up, I was always a daddy’s girl, hanging out with him in the garage, fishing, and building stuff. I loved to play softball and swimming, but reading, telling stories, and writing were my passion, even at a young age. I took a break from writing for a while, but you could always find me with a book in my hand.
I have three children – two boys and a girl. They are my whole world. Even when I’m having the worst day ever, they brighten up my day and make me smile.
A few years ago, there was this story that would always play out in my head and no matter how many times I went through it, from beginning to end, it would never fade. So I decided to put it on paper. I didn’t plan on publishing it, but when it was almost done, a friend asked to read it. She said it was a story that needed to be shared. And that’s what started my writing career.
I love all genres of books, and even though I started with writing MC Romance, I have a whole book of ideas, so you can expect more from me than just MC, though romance is in my blood.
Even though I currently work two jobs, my ultimate dream is to become a full time author. I want to be able to spend my days filling pages with stories. I want to be the reason people find a reason to smile or laugh from lines on a page. Reading a book allows me to live in someone else’s shoes, even if only for a few minutes. It’s a way to leave my life and troubles behind and I want to be help others do that as well.
LIMITLESS PUBLISHING: http://www.limitlesspublishing.net/authors/shelly-morgan/
FACEBOOK: https://www.facebook.com/Author-Shelly-Morgan-809266812448318/
GOODREADS: https://www.goodreads.com/author/show/10914599.Shelly_Morgan
TWITTER: https://twitter.com/Shelly_Morgan34